About The Cupboard Trilogy

A while back I began a selling/buying group on Facebook called The Craft Cupboard, which turned out to be more successful that I could ever have dreamed of. After a while, as members began to grow & friendships in the cupboard began to emerge, members were wanting to pass on tips  & advice on how products worked & show each other there cards ect, with a particular product or technique used. These started to creep on to the group's daily feed, this in turn would clog up the feed & put potential buyers/sellers off. So, I created a second group called The Craft Cupboard Show & Tell, it was only open to members of my first group & they were able/allowed to link beween the two groups. Linking to ouside parties. groups, pages & blogs is forbidded in the selling group! Again, with this second group I thought it might it might be used by just a few members, but again it took off & is a busy group, the rules are much more relaxed in the Show & tell group & members have embraced it. Members are now uploading & sharing thier craft work & wow there is so much talent out there.
I have a loyal group of administrators that help me to monitor the groups,
without them I would be online monitoring twenty four seven, I owe them a lot .....
The two groups are UK only, this is because of the postal costs when buying & selling, as much as I would like to be able to throw the doors wide open for international members as well, I just don't think it would work!
Then, in November 2011 I started a third group, it is an open group meaning that although people still need to apply to join, the group can be found in Facebook search. This third group is for any crafters that make things to sell, it is still in it's infancy but word is slowly getting around.
If you craft & sell what you make, then search for TCC Marketplace when on Facebook & apply to join.

Thank you for supporting our challenges

The Cupboard Trilogy is Registered & Protected by Copyright 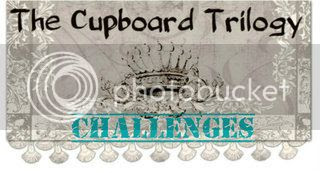